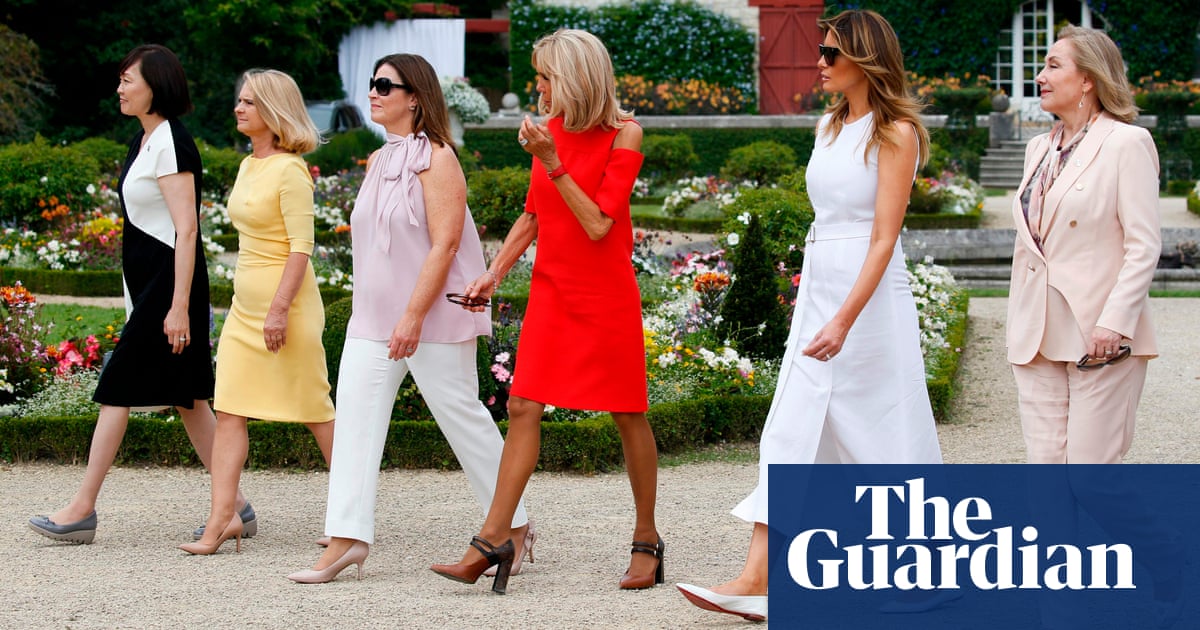 It was Donald Tusk on Instagram that did it. Four wives of world leaders – Melania Trump, Brigitte Macron, Małgorzata Tusk and Akie Abe – dressed in a spectrum from white to cream, skirts aflap, were enjoying the sea views at Biarritz during the G7 summit. It was a delineation of the acceptable limits of women on the world stage: they look like brides and it is their backs – their backs! – that are demurely captured on film. It would have been just about bearable were it not for the European council president’s caption: “Melania, Brigitte, Małgosia and Akie – the light side of the Force.” It is a statement that says so much: these women are the summer to the winter of us men, the fragility to our strength, the light side of our force. It was the first time I wanted to leave the EU.

Maybe Tusk was having an off day. Surely, the French president, Emmanuel Macron, does not see his wife, Brigitte, as the “light side of his force”. Yet the patriarchy has many tendrils – and a much greater reach even than Tusk’s Instagram account.

Unavoidably, when wives down tools to follow their husbands to world summits, it underscores the message that women don’t really have important business of their own. Sure, ladies, you have a little job and take it as seriously as you like, but when there is politics to be done, your presence, which begins and ends at decorative, is required. It is a world view that is slightly more textured than an assumption that women are wives first and independent beings second. There is the whiff of a heteronormative code, too: if the wives aren’t going to do much more than look into the middle distance, their real purpose on the trip is to prove that the husband is a red-blooded fellow. Obviously. Because he has a wife. The Theresa and Philip May days are a reminder of the final leg of this ideological tripod: that only men belong at these events. This is why Angela Merkel never takes her husband on trips: people used to say Prof Joachim Sauer was “publicity shy”, or “intensely private”. In fact, the questions that tableaux would have raised – what will the professor do while the ladies are visiting the female football team? – would have undermined Merkel. If he was out of place, then it followed that she was, too.

More depressing is the inexorable slide into beauty contest: it starts off subtly, with an admiring comment on a dress – and why not add the price tag? It blossoms into a full ranking system, every attribute picked over. This is not limited to wives, but besets female politicians, too; never forget May and Nicola Sturgeon’s meeting in 2017, which descended into a contest over who had the best legs, on the principle that both women had legs and neither woman was wearing trousers, so what could be more natural than to compare the legs? No one likes overstatement, but when female political leaders can’t go anywhere without having their body parts evaluated to see who, by social consensus, is more shaggable, then we are in a catch 22.

But back to the spouses. In 2010, the spouses did not attend the G8 summit in Ontario. Was it because of the disconnect between a summit that concentrated on women’s empowerment via maternal health and neonatal outcomes while a line of women utterly disempowered by their spousal status was considered too stark? No, it was because the summit was in Huntsville which is apparently a pain to get to. They stayed in Toronto instead.

Now, by contrast, it seems that things have somehow got worse. I woke on Tuesday morning to Macron decrying the extraordinarily rude behaviour of the Brazilian president, Jair Bolsonaro. To be fair, the Amazon is on fire; it would not be unreasonable to imagine France having made a suggestion about the world’s lungs and Bolsonaro retorting with some fresh idiocy. But, in fact, the president of Brazil had liked a post on social media that suggested that his wife, Michelle, was hotter than Macron’s, and that this explained the diplomatic tension. Bolsonaro did more than like the post. He replied: “Do not humiliate the guy, ha ha,” adding that piquant stone-age layer wherein a man’s virility is conveyed by the hotness of his wife. It is like an anxiety dream, hurtling so fast back to pre-civilisation, grabbing the memory of Michelle Obama’s sass as we go. (As a coda, she managed to sidestep that appearance of charming helpmeet, somehow conveying with her presence a mildly subversive purpose. At the 2013 G8 in Belfast, she persuaded a bespoke performance out of Riverdance. I rest my case).

The spectacle of domesticity that came with bringing the wives along used to humanise the men: without the wives, they were suited, stern and interchangeable. With a wife attached, you could imagine them having an aperitif, maybe laughing, understanding the human condition, possibly even seeking to enhance it. That was the theory, anyway.

For Donald Trump, however, having Melania in tow seems to further dehumanise him, because she looks so unhappy. We have seen her grinning in disaster zones (recently, holding an infant who had been orphaned in a mass shooting in El Paso, she looked like she was posing for a Christmas card), looking catatonically bored everywhere else (the State of the Union address is understandably tedious, of course, but even in North Korea, which would surely pique anyone’s interest, she looked as if she was watching a shopping channel).

Commentators have started to invent romantic fantasies for Melania – first she was in love with Barack Obama after being photographed laughing next to him at Barbara Bush’s funeral. Now, thanks to a photograph at the G7 in which she is turned away from her husband and seemingly about to kiss the Canadian prime minister, Justin Trudeau, she is in love with him, too.

These flights of fancy illuminate just how much we see women as arm candy. Melania is beautiful, ergo she must embody love; she cannot love Donald, ergo she must love someone else. They convey something, too, about our current feeling of global political impotence. In the face of a man such as Trump – who thinks he can nuke a hurricane and criminalises toddlers – we retreat to the fairytale and wait for Prince Charming to save his wife, and by extension, all of us.

In the 90s, political wives embraced their decorative status with a certain irony. The decidedly unskittish Hillary Clinton and Cherie Blair seemed to say: “You want us to act like Guides? We’ll give you Guides. In the noughties, post-Seattle, when these summits became sites of anti-globalisation protest, there tended to be a social justice agenda bolted on to the wives’ presence, so they would journey en masse to a worthwhile project that had been carefully filleted of any problematic politics. “The wives of the G8 leaders have a schedule almost as busy as their husbands,” ran one nauseating strapline in the Daily Telegraph in 2009, when the women visited the site of a devastating earthquake that had hit L’Aquila in Italy a few months earlier. Earthquakes are potentially a great PR opportunity, since you cannot attribute them to global corporatism. But in this case, it did not work, partly because the Italian press described their meeting beforehand as a “pink power lunch”, but mainly because there is no erasing the slam-dunk sexism of the enterprise, and all the attendant misogyny that permeates the coverage surrounding it.

The way to change things is simple: they have to stay at home. It may not be the wifely thing to do, but wifeliness and dignity, in a world summit context, cannot coexist, if indeed they ever can.