She fights every ‘troll, psycho and perv’ she can find – and uses the law to do it

In 2012, Carrie Goldberg, a lawyer, met a man she calls her “psycho ex”. The man swept her off her feet and treated her like royalty, which is why it took a while for her to notice how he had began to slowly violate her privacy: he took photos of her without her consent, demanded to know her whereabouts constantly, and grew furious when she would not respond to his calls. She broke up with him.

He then tried getting into her apartment, sent her hundreds of threatening messages, and sent emails attaching photos of her in compromising positions – cc’ing judges and lawyers she knew. The police responded to her concerns with a pattern she would encounter repeatedly throughout her career: they shrugged and told her there was nothing they could do.

When she took it before a judge, he responded that preventing Goldberg’s ex from posting compromising pictures of her online violated her ex’s free speech.

The sense of injustice she felt at the time now fuels her work as a victims’ rights lawyer specializing in sexual privacy violations. “If somebody is injured, the person or entity responsible must pay,” she writes in her new book, Nobody’s Victim. “This concept drives a lot of the work I do with my clients today.”

Over the last three years, Goldberg has become a leading expert on violations facilitated by the internet. Her clients range from schoolchildren to millionaires, but all have been in the crosshairs of malicious men (and it’s almost always men) who ruin the lives of their victims.

An example of Goldberg’s work involves a client she calls “Francesca”, who believed a recent fling was using a compromising photo of her in his Facebook profile, while posting under his own name. Every time he posted, the photo would appear. She also received other mysterious forms of digital harassment, such as threatening text messages and emails from people claiming to be the wives or girlfriends of men she had relationships with. 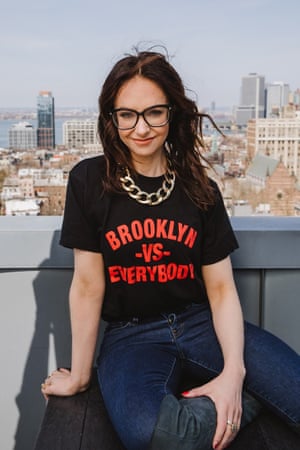 Goldberg didn’t think Francesca’s fling was responsible – she knew this level of harassment usually came from someone who is even closer to the victim. She soon discovered the harasser’s identity after her associate dug through a PDF Francesca had received and found the name of the last person to edit it.

Goldberg asked Francesca: “Do you know a Juan Thompson?”

Francesca replied: “He’s my boyfriend. Why?”

Thompson had been harassing Francesca in various guises, then acting as a comfort blanket in real form. Goldberg helped obtain protection for her client, then advised her to break up with him. He did not stop. Instead, he escalated his attacks for months, avoiding arrest and targeting her family – then he reported fake bomb threats using Francesca as the perpetrator. He was eventually arrested.

An industry that can’t be held accountable

In 2017, Goldberg was representing Matthew Herrick, a client whose scorned former boyfriend used the popular gay dating app Grindr to harass him. This time, the ex had created numerous fake accounts with a call for sexual encounters using Herrick’s face and location.

One avenue Goldberg took was confronting Grindr’s refusal to act. Grindr’s defence arose from US legislation, Section 230 of the Communications Decency Act (CDA). It grants companies immunity from repercussions for what users post, since the companies are not viewed as publishers of the content. Goldberg believes this leglisation “is the enabler of every asshole, troll, psycho and perv on the internet”. Because internet companies are not legally bound to protect their users, Goldberg says, many of them don’t.

The rise of the deepfake and the threat to democracy

She points out that services like Twitter and Facebook may have terms and conditions, but they’re not enforceable. “Until terms and conditions are enforceable in court, I don’t give a shit what these companies say are in them,” she says (Goldberg is very liberal when it comes to swearing). The only available fix is for lawyers like her to “be able to sue the fuck out of them for product defects”.

Aftermoving through various courts, the Grindr case was dismissed because of Section 230. “Grindr had enabled and facilitated Matthew’s abuse,” she says. “They knew it was happening. They could have stopped the strangers showing up at Matthew’s door. But legally they didn’t have to do anything to keep Matthew safe because of the fucking CDA.”

This immunity given to tech companies, she believes, “is a government handout to the one industry least deserving of it. Besides the gun industry, name me one other industry that can’t be held accountable to people harmed by their product?”

The future of online law

The law professor Danielle Citron, in her book Hate Crimes in Cyberspace, notesthat the label “cyber” is important to attach to various malicious conduct. “[It] adds something important … It captures the different ways the Internet exacerbates the injuries suffered.” Letters can be thrown away, slurs dismissed – but the internet not only facilitates the act of harassment itself, it becomes a monument of harassment a victim must endure whenever they are online. It can also be witnessed by potential employers or family.

I ask her about Deepfakes – fake audio or video that can look extremely convincing. She tells me her firm saw the technology coming. With deepfakes, “you not only have innocent people imposed into videos of fake scenarios, but you also have guilty people that have new deniability when videos show them in real scenarios.”

One issue remains: it only targets defendants who acted with the intent to harm the victims.

Goldberg says she’s aware of the criticisms, but is glad nonetheless for the law’s existence. It not only means at least there’s now a deterrent, but that victims can take matters into their own hands. “For instance,” she tells me, “if law enforcement is moving too slowly, a victim can get an order of protection from family court. If the offender violates that, [the offender faces] an automatic arrest and the additional crime of violating the family court order.”

I ask Goldberg whether she thinks law students are being adequately taught when the internet is often relegated to its own separate subject in schools. She has a firm position. “Law schools that aren’t infusing internet law into every subject are not preparing students for the present. It’s not enough to just have a class called internet law. It needs to be worked into all courses.” She notes the intersection of free speech law and Twitter harassment; human rights law and Facebook’s link to Myanmar violence; criminal law and computer fraud.

In the final chapter of her book, Goldberg advises a young law student to “find your biggest obstacle, that thing that makes you feel most powerless, and ask yourself, ‘How do I fix this?’ That’s the fight you should devote your life to.”