Sandra Aguilar-Gomez remembers an atmosphere of camaraderie and celebration when thousands of Mexican women took to the streets for the “violet spring” protests of 2016.

Three years later and the demonstrators are back to demand an end to violence against women – but this time the mood has soured.

“What I saw on the streets was rage and desperation,” Aguilar-Gomez, 28, a postgraduate student and feminist activist, said of the recent rallies in Mexico City. “Because things haven’t changed a bit.”

Aguilar-Gomez is one of thousands of women who have joined the so-called “revolucióndiamantina” (glitterrevolution) in Mexico’s sprawling capital. The movement earned its name after protesters showered Mexico City’s security chief with pink glitter during their inaugural demonstration on 12 August.

That protest was a reaction to the alleged rape of a teenage girl by four police officers in Azcapotzalco, to the north of Mexico City, in the early hours of 3 August.

The demonstrators, who marched with placards saying, “All Women Against All Violence” and, “If you violate women we will violate your laws”, are also demanding broader changes in a country where an average of 10 women are murdered every day and virtually all such crimes go unpunished.

“It is an unsustainable, femicidal situation,” said Yndira Sandoval, a campaigner whose group, Las Constituyentes, is among those that has joined the movement. 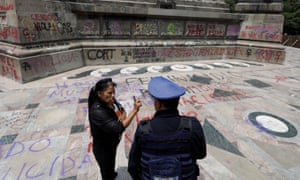 A woman speaks with a police officer near the Angel of Independence monument in Mexico City. Photograph: Luis Cortes/Reuters

“It’s hard to change this mess in less than a year … [But] we were very hopeful that having a woman from that political group would bring policy change to address the violence crisis against women,” said Aguilar-Gomez, who said many glitter revolution protesters had backed the leftist pair in last year’s vote.

Nine months on, much of that hope has evaporated. Women’s rights activists are mistrustful of López Obrador’s alliance with hardline evangelical politicians and have condemned swingeing budget cuts, included funding for women’s shelters being cut.

Sheinbaum, meanwhile, infuriated feminist protesters by branding their first mobilisation – which resulted in the glass entrance to the attorney general’s office being smashed – “a provocation”.

By doing so, Aguilar-Gomez said Mexico City’s government had legitimised a wave of online abuse and threats against feminists.

Sheinbaum’s attack sparked outrage and a second protest, on 16 August, also turned violent and resulted in one of Mexico’s best known landmarks – the iconic Angel of Independence monument – being scrawled with graffiti denouncing violence against women. 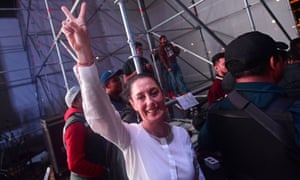 Aguilar-Gomez said she was frustrated that, since then, much of the media focus had been on the defaced monument and not the discrimination and attacks against Mexican women.

“It’s unbelievable … They can’t see the pain in the faces of the mothers and sisters of murdered women, and the raped women, and the harassed women who were there at the protest,” she said. “But they are very, very, very empathetic with this lady made of stone.”

On Sunday, Sheinbaum met with representatives of the movement and promised a month of discussions designed to help eradicate gender violence.

Sandoval, 33, said she feared it was an attempt to “contain and co-opt” the movement, rather than bring about real change.

Aguilar-Gomez said she was hopeful for positive change and said the demonstrations would continue if that did not happen.